Series / Monarch of the Glen 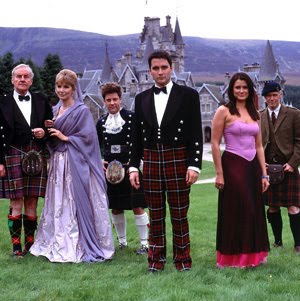 The central character is Archie MacDonald (Alastair Mackenzie), reluctant new Laird and latest in the line of Glenbogle, who would really rather be running a restaurant in London than dealing with the crumbling and cash-strapped estate. Richard Briers and Susan Hampshire are his parents, Hector and Molly.

Based loosely on Compton Mackenzie's 1940s Highland Novels, although it makes more sense to think of Hector and Archie as descendents of Mackenzie's Laird, rather than the series being a Setting Update.

Monarch of the Glen provides examples of: