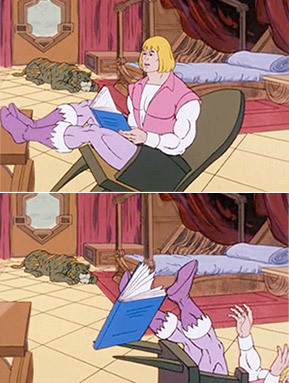 By the power of Gravity!
Advertisement:

A character has just encountered something so surprising, shocking, or hilarious that he falls off the chair on which he was sitting. Occasionally, the entire chair may tip over with him. The character may have just been told not to lean back in his chair.

May be a consequence of Swivel-Chair Antics. Compare Face Fault, Breaking Bad News Gently (when it involves saying "You better sit down"), and Dramatic Drop, though in this case the thing being dropped is yourself. Sister Trope of Spit Take, Forgot to Mind Their Head and Dramatic Sit-Down. It's named after the non-trope People Sit on Chairs.