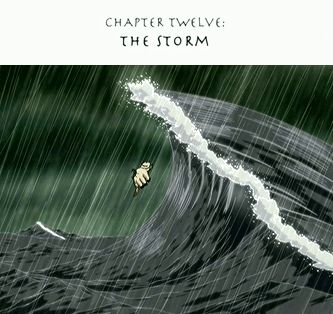 This episode made a lot of waves.
Advertisement:

Could be a hurricane, flood, tornado or blizzard, but the result is basically the same: the plot of this week's episode takes place against a backdrop of serious weather complications. The characters will probably suffer loss of cell phone service, power outages, backed-up traffic, competition for basic necessities at the supermarket, straggling evacuees, getting cut off from wherever they need to be, and a very distracted police force spread thin trying to handle storm preparations.

If it's a mystery show, a Closed Circle will result, the detectives will often have to rely on old-school methods while communications are down, and chances are good that someone is trying to use the weather as a convenient cover-up for a crime.

If there's an action element to the show, there will be a threat of getting stranded or outright killed by the weather. Our heroes will, naturally, ignore any and all storm warnings.

In video games, this trope is used when a level takes place in stormy weather. This may often involve dodging lighting as it strikes, being pushed back by fierce winds, fighting a boss at the end of the level, or any combination of the three.

Often (but not always!) features Hostile Weather, and in the winter, the heroes may be stuck Braving the Blizzard. Contrast Rain, Rain, Go Away, which is a gentler trope more common in sitcoms and children's shows. The Big Storm Episode may well feature glimpses of Rain, Rain, Go Away or its more severe cousin Snowed-In, but the Big Storm Episode is by and large not a Bottle Episode. Expect most of the cast to be relatively mobile even if their typical mode of transportation is compromised. Can occasionally overlap with a "Stuck at the Airport" Plot, or paired with New Baby Episode for Born During a Storm. See A Storm Is Coming for more metaphorical examples.

In this episode, The Warden's weather-controlling robot plunges Superjail into an apocalyptic superstorm.

In this episode, The Warden's weather-controlling robot plunges Superjail into an apocalyptic superstorm.