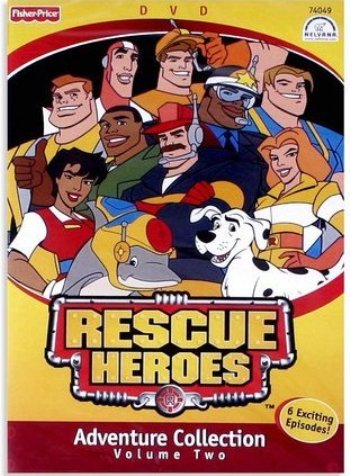 Rescue Heroes began as a toy series by Fisher-Price. It was turned into a Merchandise-Driven children's show by the world-renowned Canadian animation studio Nelvana that was shown on Teletoon and CBSnote Later Kids' WB! after getting Un-Canceled that taught kids about safety and a couple of other issues starting back at 1999.

The Rescue Heroes Global Response Team is a team of emergency rescue specialists (firefighters, police, mountain climbers, divers, spelunkers, etc.) who are on call at a moment's notice to travel to the sight of major emergencies anywhere in the world and deal with them, usually employing a variety of high-tech vehicles and equipment. All this is directed by astronaut Roger Houston, who watches over the world from a space station. Conceptually very similar to the classic series Thunderbirds, but set in the Present Day. Contrast with Tomica Hero Rescue Force and Tomica Hero Rescue Fire.

Oh, and absolutely every recurring character has a Meaningful, Punny Name, whether he/she is based on a toy or not.

In 2019, a Flash-animated reboot series was released on the Fisher-Price YouTube channel, with an all-new toyline accompanying it. Nelvana also has every episode of the original show available online through Treehouse Direct