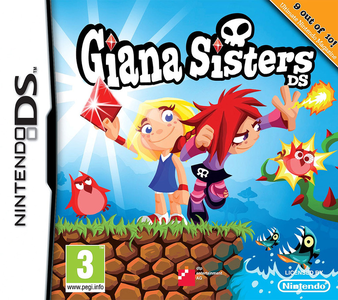 Don't let the title fool you;
only one sister actually returns.
Giana Sisters DS is a Nintendo DS successor to the Commodore 64 game The Great Giana Sisters and a reboot of the Giana Sisters series. It's a platformer about a girl named Giana who's on a quest to retrieve magical blue diamonds.
Advertisement:

Released in 2009 by the publisher DTP Entertainment and developer Spellbound Interactive, Giana Sisters DS is a retool of the original game. It has 8 worlds with 9 stages and 1 bonus stage each.

Giana Sisters DS was released in Europe and later Australia, with North America getting a limited release in 2011. It has ports on the iPad, iPhone, and Android. There's also a PC port called Giana Sisters 2D.