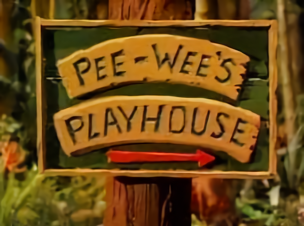 The beginning of one of the wackiest title sequences ever.
Advertisement:

In 1980, Paul Reubens (after being turned down for a chance to be a Saturday Night Live cast member) created a stage show called The Pee-Wee Herman Show, parodying the children's live action TV shows of the 1950s and '60s, with a subversive, playfully risque twist. After a successful HBO comedy special and years of performance, Reubens teamed with Tim Burton to create the movie Pee-wee's Big Adventure, based on the title character. The surprise success of the movie got CBS interested in an animated version of the original stage show. Reubens eventually negotiated for a live-action version that was more kid-friendly than the HBO version, but still had flashes of adult humor.

Unusually, the show got a sitcom-level budget and creative control was left almost entirely to Reubens and his crew. Initially filmed in a converted New York loft for the first season (which, according to many past cast members, was a living nightmare to work in, as it was always hot), the show moved to a full-size set in Los Angeles for the second season onward, which is why the playhouse in the first season looks so much smaller than in later seasons. However, the production schedule for the show was still grueling (a single episode took 10 sixteen-hour days to shoot, at a cost of $350,000 per episode), and the show ended after filming Playhouse for Sale.

The show focuses on Pee-wee's life at his luxurious playhouse, where everything is alive and anything could happen. It featured a large cast of colorful characters including a talking chair, a robot, a magic computer screen, a talking globe, and all sorts of puppets. The show also featured plenty of stop-motion animation (think Gumby) as well as Golden Age cartoons. Reubens was also able to cast several members of the The Groundlings who had worked with him on the original stage show including Phil Hartman (Captain Carl) and Laurence Fishburnenote Credited as "Larry" Fishburne. (Cowboy Curtis), as well as future stars S. Epatha Merkerson, (Reba the Mail Lady), Johann Carlo (Dixie the Cab Driver)note (who later went on to play a role in the movie Quiz Show) and Natasha Lyonne (Opal, one of the members of the first season Playhouse Gang).

In its first year, the show won six Emmy awards. The show gained a following of both children and adults thanks to its nostalgia and excellent writing, prompting CBS to show some episodes during prime time as well as Saturday mornings. While Reubens tried to have the episodes based around moral lessons, heavy use of Rule of Funny kept it from being preachy.

The show ran on CBS from September 13, 1986 until November 17, 1990 and spanned five seasons, one of which (the third season) was comprised of only two episodes - three if you count the Christmas Special - due to the 1988 Writers Guild of America strike and the production of Reubens' second Pee-wee movie Big Top Pee-wee.

In 2011, Reubens staged a new live show integrating elements from the original as well as the TV show. All five seasons (and the Christmas Episode) have been released on DVD and have been added to Netflix in the United States, Canada, and the United Kingdom.