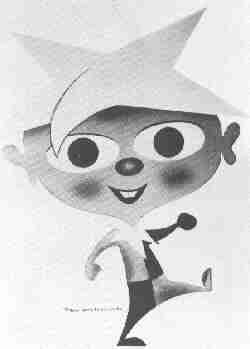 The titular mascot of the show.note Don't do an image search for "Winky Dink" without SafeSearch on.
Advertisement:

One of the first (pseudo-)interactive TV programs for children, Winky Dink and You aired from 1953 to 1957 on CBS. Its host, Jack Barry, would become more famous for his quiz shows, including 21 and The Joker's Wild. Dayton Allen played Barry's sidekick, Mr. Bungle.

The series required the use of a clear plastic overlay and special crayons, which had to be ordered from New York at 50 cents per kit. Whenever the animated hero Winky Dink and his dog, Woofer, got into trouble, Barry would ask viewers to put the overlay on the TV screen and draw in the required prop or scene element, such as a bridge. The program ended with a secret message, which was to be traced by children who had the overlay and crayons. Inevitably, some children forwent the plastic overlay and drew directly on the screen... which exasperated parents who discovered crayon marks all over Walter Cronkite or Lucille Ball.

A syndicated version aired from 1969 to 1973 for 65 episodes. A new kit was sold in the 1990s, containing the magic screen and crayons, along with all-new digitized episodes.

You can watch a 1950s episode at the Internet Archive

(but don't draw on your computer screen).