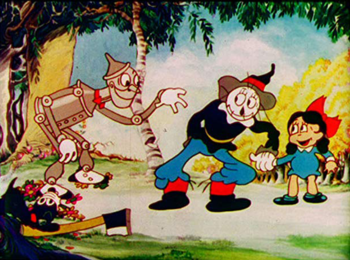 The Wizard of Oz is a 1933 animated short based on the book The Wonderful Wizard of Oz. It's a 8-minute short that loosely adapts the source. The short features very little dialogue, using mostly music and sound effects. The Wizard of Oz is the first animated adaptation of the Land of Oz books and was animated by Ted Eshbaugh.

It starts with a bored Dorothy playing fetch with Toto. Suddenly a tornado strikes and whisks her away to Oz. There, Dorothy and Toto meet the Scarecrow and the Tin Woodsman. When the group arrives at the Emerald City, there is a parade being thrown. Dorothy and her friends join the parade and end up arriving at the Wizard of Oz's castle. They meet the Wizard and he performs tricks for them. One of the eggs he creates doesn't hatch and, instead, it grows to a huge size. After much trouble, the egg hatches to reveal a baby chick. The short ends with the characters singing "Rockabye Baby" to the chick and its mother.

Though the short is only vaguely based on the source novel, it used the idea of Dorothy suffering from Small Town Boredom years before the more iconic MGM film of the same name did. It's also the first medium to depict Kansas in Deliberately Monochrome but Oz in full-colour, taking a cue from L. Frank Baum describing Kansas as a "gray" place, and Oz as boasting several colors. The MGM film took several aspects from this cartoon and used it.

The Wizard of Oz is also one of the first animated works to be made in color and one of the first to have a complete soundtrack. The former led to legal issues, however. Due to legal troubles with the Technicolor Corporation (which at the time only allowed Disney to use its 3-strip process), the short was never distributed. Due to this, it hasn't been as properly preserved as other shorts from the period. The first commercial release was in 1985 and it has since been rereleased several times in varying qualities.