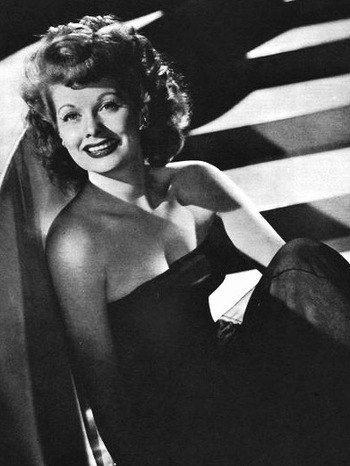 Lucille Désirée Ball (August 6, 1911 – April 26, 1989) was an American comedienne, actress, model, and film and television executive. She appeared on stage, screen and radio, but is primarily known as one of the most popular and influential television stars of all time.

Along with her late brother Fred, Lucille spent most of her childhood in or near her native Jamestown, New York. She first became involved in show business by performing as a chorus girl in a Shriners show at age 12. After attending drama school she found work as a fashion model and actress in New York City. In the early 1930s she moved to Hollywood and began appearing in small movie roles. Eventually she moved up to starring in B-movies for RKO Pictures; so many of them, in fact, that she came to be known as the "Queen of the B's." Among her better-known films are Stage Door, Dance, Girl, Dance, and Five Came Back. She also worked in the theater and in radio.

In 1940 she met Cuban-born bandleader Desi Arnaz while filming Too Many Girls; the couple fell in love and soon eloped. 1948 saw her cast in a successful radio sitcom called My Favorite Husband, which CBS soon decided to develop for television. She insisted that Arnaz be cast as her husband on the show and, after a vaudeville tour to prove that the pairing could work, CBS agreed. I Love Lucy ensued. It was followed by several The Lucy-Desi Comedy Hour specials and two more successful sitcoms (The Lucy Show and Here's Lucy), which extended her TV stardom virtually uninterrupted through 1974.

During this time she continued to appear occasionally in movies and on Broadway, co-founded Desilu Studios with Arnaz — which the couple would continue to run even after their 1960 divorce, until Ball purchased it outright two years later — and even took the time to mentor an up-and-coming young comedic actress named Carol Burnett, who soon went on to achieve success in her own right. Her starring role in the film version of the musical Mame was a notorious flop, however, while an attempt at a television comeback in the 1980s (Life with Lucy) failed.

Her children, Lucie Arnaz and Desi Arnaz Jr., are actors and singers in their own right; both appeared alongside their mother as regulars on Here's Lucy.

At present, with the exception of Here's Lucy, CBS owns the rights to all series starring Ball, having acquired the rights to I Love Lucy (and by extension, The Lucy-Desi Comedy Hour) when it purchased Desilu's pre-1960 library in 1960, and inherited the rights to The Lucy Show and Life with Lucy from Paramount (who had inherited the former from Desilu, and the latter from Spelling Entertainment and its distribution arm, Worldvision Enterprises). Paramount has released the entirety of the CBS-owned series on DVD, while MPI Home Video has issued Here's Lucy and her subsequent specials.

Nicole Kidman portrays Lucille in the 2021 biopic film Being the Ricardos which is set at the time of I Love Lucy. Christine Ebersole plays a No Celebrities Were Harmed Expy of her in Licorice Pizza.

Lucille Ball and her works provide examples of: