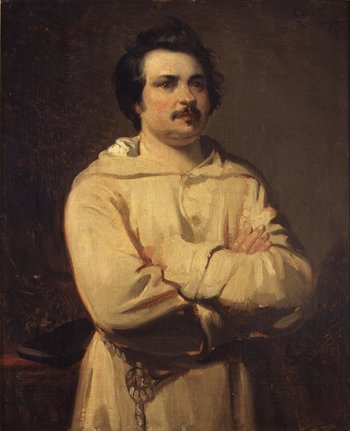 Honoré de Balzac (1799-1850) is one of the greatest writers in French letters. His obscurity in the Anglophone Media is inverse to his omnipresence in France and his influence on writers and artists in variety of media. Henry James called Balzac one of his favorite authors and wrote of him extensively as a critic. Sculptor Auguste Rodin would sculpt a masterpiece with his monument and the film-makers of the French New Wave cited him as a Patron Saint.

His style of writing is unique for its versatility, its exhaustive descriptions of French urban life and its social classes in quasi-ethnological detail and the distinctive tone of irony, cynicism and dark humour with which he chronicles post-Revolution France at the time when the aristocrats were losing out to the rising middle classes. Despite his own royalist leanings, his rich descriptions of working-class life and the nascent rise of middle-class capitalism meant that he was a favorite of ideological opposites Karl Marx (whose Capital makes repeated references to his works) and Friedrich Engels who once stated that Balzac taught him more about economics than any amount of financial reports.

Of course, Balzac differs from his disciples Emile Zola and Gustave Flaubert in that the social thesis was merely a consequence of his writing style. As a writer he sought to create a Paris that was as rich and vibrant as real-life but with vast connections that carried with it something fantastic. And indeed his characters are often cut from the same cloth as adventure heroes. Some of Balzac's works are closer to Walter Scott than conventional realism.

Balzac's supreme achievement was La Comédie Humaine which is an Unbuilt Trope of a The 'Verse. He intended the series to cover France social life in all its facets, institutions and classes, indeed on coming up with the idea, he announced to his sister, "I am about to become a genius". He would sub-divide and arrange his novels under sociological labels - "Scenes from provincial life", "Scenes from Private Life" - and it often featured walk-ons and Continuity Nod of characters from other books who appear and pass by as Hero of Another Story in a cameo appearance. These books could be read separately on its own as a self-contained story but it gained further detail by association with each other.

The cast of characters were equally rich, the social-climber Rastignac, the criminal mastermind Vautrin, the Duchesse de Langeis and the secret society of the Thirteen, a quasi-Masonic organization that exists on the margins of Parisian Life (a plot element that, along with La Comédie Humaine itself, would notably inspire Jacques Rivette's thirteen-hour film Out 1). In addition, he also wrote fantastic stories like Sarassine and The Wild Ass's Skin.

Balzac was absurdly prolific and an obsessive workaholic in terms of volume of ink and paper, though Flaubert who admired Balzac pointed out that this meant that his books tended to vary in quality. He was also a larger than life figure among his friends and mistresses. Later in life, Balzac after a long life as a bachelor, married Ewelina Hanska, finding happiness before his very early death. Victor Hugo gave the eulogy at his funeral.

Works by Balzac with their own pages include:

Other works by Balzac contain examples of: