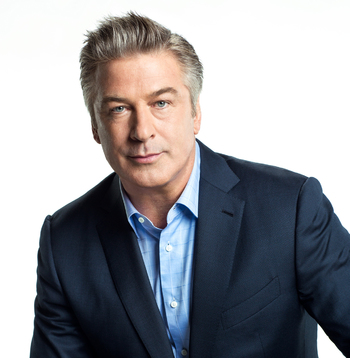 "When I told my parents, 'I'm going to be an actor,' they screamed and wept and freaked out."
Advertisement:

He is the eldest and arguably the best-known of the Baldwin brothers (the other three, in descending order of age, are Daniel Baldwin, William Baldwin, and Stephen Baldwin). In 2011, he passed Steve Martin as the new record holder for most episodes of Saturday Night Live hosted and became famous (or notorious, depending on your political views) from 2016 to 2020 for appearing on SNL as then-President Donald Trump.

He has seven children; a daughter, Ireland Baldwin, with ex-wife Kim Basinger, and six kids with second wife Hilaria Baldwin.

Baldwin is also active in politics. Outspoken about his liberal views, he has hosted a short-lived talk show on MSNBC, mulled a run for New York City mayor, and written columns for The Huffington Post.

On October 21, 2021, while filming the Western film Rust, an incident occurred where Baldwin discharged a prop firearm that (apparently unbeknownst to him) proved to be loaded with live rounds, critically injuring director of photography Halyna Hutchins and injuring director Joel Souza. Hutchins died but Souza survived and was discharged from hospital the next day. Production on the film was immediately halted while a full investigation into the incident was launched.

No relation to and not to be confused with Adam Baldwin.

Alec Baldwin and his works provide examples of: