Man of a Thousand Voices 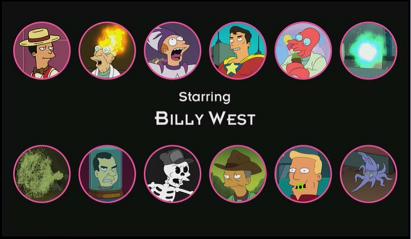 "If we had some sort of machine which could imitate any voice, we'd only need one voice actor."
"We do; it's called 'Billy West'."
— Futurama DVD Commentary

Voice Actors known for a wide range of voices, and therefore voicing Loads and Loads of Characters. Fact is, the industry is incredibly small, and there just aren't enough actors to cover all the exponentially increasing amount of characters and projects created each year. Being versatile is required.

Bonus points if the actor is able to avert Larynx Dissonance and Not Even Bothering with the Accent, but it's not vital.

Name comes from a nickname given to Mel Blanc, who was responsible for nearly every classic Looney Tunes character. (This is an exaggeration, however. He admits in his autobiography that he "only" did about 850 voices.)

Can overlap with Talking to Himself, if the actor does multiple roles on the same show.

Interestingly enough, the vast majority of voice actors and vocal work don't create "voices" but are largely using their own natural voice with slight tonal changes, pitched up or down. Thus it is still possible for a Pigeonholed Voice Actor to ironically also have "a thousand voices," just people aren't aware of their versatility.

Not to be confused with Voice Changeling or Voice of the Legion.

Just choose a few key roles to give an idea of the actors' ranges. Save large lists for their own pages.