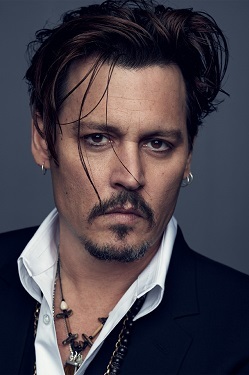 "I am doing things that are true to me. The only thing I have a problem with is being labeled."
Advertisement:

A native of Owensboro, Kentucky, Depp is best known for his portrayals of memorable, offbeat characters and his refusal to be typecast as a Hollywood Pretty Boy. He is a frequent collaborator with equally offbeat directors Tim Burton, Gore Verbinski, and Terry Gilliam.

He's had two children with French singer/actress Vanessa Paradis (his longest relationship to date), Jack John Christopher III and Lily-Rose, who's become an actress herself. He was later briefly married to Amber Heard.

A small sampling of his roles include:

May possibly be trapped in a rather weird place called 'Burtonland'.