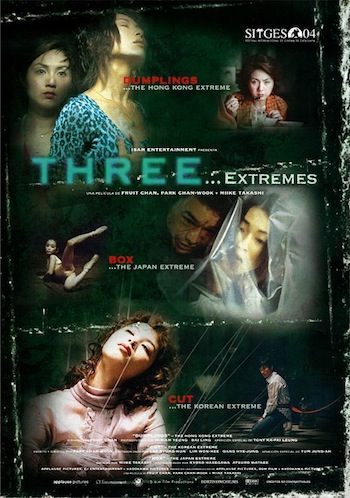 It was predated by the earlier anthology Three; the film's international release came after this one and was thus called 3 Extremes II.

Dumplings would later receive a feature-length adaptation in 2004 under the same title.

An aging actress wishing to reclaim her youth goes to a woman who makes dumplings that supposedly have regenerative properties; however, they contain a gruesome secret ingredient. Directed by Fruit Chan. Was later released on its own in an extended cut.

A successful film director and his wife are kidnapped by an extra, who forces the director to play his sadistic games. If he fails, his wife's fingers will be chopped off one by one every five minutes. Directed by Park Chan Wook.

A soft spoken young woman has a bizarre recurring nightmare about being buried in a box in the snow. Searching for her long lost sister, she realizes her dreams and reality may possibly be connected. Directed by Takashi Miike.