Film / Alice Through the Looking Glass 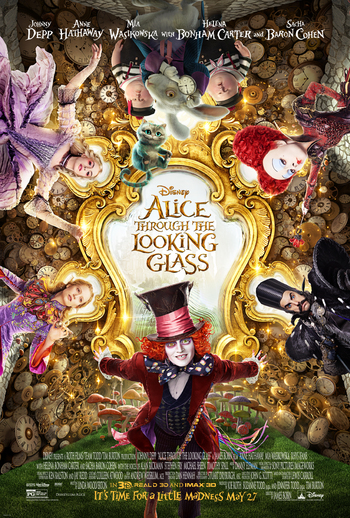 Saving the Hatter is only a matter of time.
"You've been gone too long, Alice. There are matters which might benefit from your attention. Friends cannot be neglected. Hurry."
— Absolem

Alice Through the Looking Glass is the sequel to Tim Burton's Alice in Wonderland (2010), this time directed by James Bobin (The Muppets). Mia Wasikowska, Johnny Depp, Anne Hathaway, Helena Bonham-Carter and Alan Rickman reprise their role as Alice, the Mad Hatter, the White Queen, the Red Queen and Absolem the Caterpillar respectively.

Alice returns to the magical world of Underland, only to find the Hatter in a horrible state. With the help of her friends, Alice must travel through time to save the Mad Hatter and Underland's fate from the evil clutches of the Red Queen and Time (Sacha Baron Cohen), the half-human, half-clockwork embodiment of time itself.

The film also features the final performance of Alan Rickman before his death in early 2016. It was released on May 27, 2016.

Alice Through the Looking Glass provides examples of: