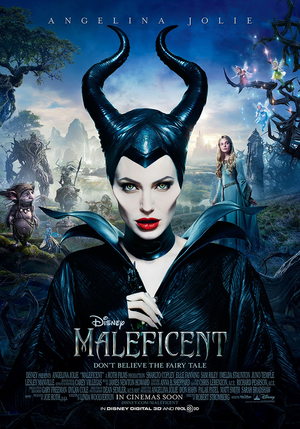 Evil has a beginning.
Aurora: All the other fairies fly, why don't you?
Maleficent: I had wings once. But they were stolen from me.
Advertisement:

Maleficent is a live-action Perspective Flip adaptation of the Disney animated film Sleeping Beauty that reveals the origin story of its iconic villainess Maleficent (Angelina Jolie), directed by Robert Stromberg and written by Linda Woolverton (of Beauty and the Beast fame).

Maleficent, it seems, was once a good, beautiful fairy princess who lived in peace until her kingdom, the Moors, was attacked by humans. She stands up against them and protects her land until a betrayal breaks her heart and turns her into the Mistress of All Evil. She gears up for revenge against the culprit, the invading king's successor Stefan (Sharlto Copley), which culminates in her cursing his newborn daughter Aurora (Elle Fanning). As the princess grows up, though, Maleficent begins to rethink her actions...

on November 13, 2013. The second trailer premiered during the Grammy Awards on Jan 27th, 2014, introducing the film's haunting rendition of "Once Upon a Dream"

by Lana Del Rey. A sequel, Maleficent: Mistress of Evil, was released in October 2019.

There are unmarked spoilers to follow on this page, so tread carefully.

Maleficent provides examples of the following: