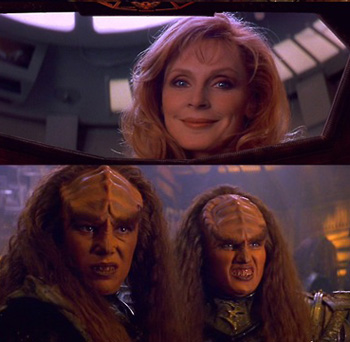 "How repulsive! It has a smooth forehead!"
Mephisto: [points to Su-In] See. That spirit medium. Her legs are long and ugly.
Su-In: M-me!? To think I'd be called ugly by a devil! I can't believe this...
— Soul Cartel
Advertisement:

Ever notice how, when aliens look at humans, they can't help but be repulsed? Even though the only visible difference between humans and the aliens is usually a bunch of forehead ridges? Who knew that the lack of forehead ridges plunged humans straight into the Uncanny Valley? Maybe they think that humans resemble scalped corpses of their own kind.

Then again, beauty is in the eye of the beholder, so what is considered attractive to us might not be attractive to others. Those same forehead ridges would often make the aliens seem like freakish mutants to humans. On the other side of the coin, truly inhuman aliens with huge pus-filled boils and spikes growing out of their skin have completely different ideals of beauty. So it's no surprise when the above alien is disgusted by humans, those disgusting creatures that have cuts on their head that contain calcified spikes surrounding a wriggling tendril that emits strange guttural sounds note mouth and teeth with tongue and a greasy mat of dead cells growing out of their head note hair as they move about on fleshy stilts. note legs Even after this, there is the idea that true ugliness is found within...one's personality.

Common variations on this trope include "humans smell terrible" and "watching humans eat is revolting".

Contrast Mars Needs Women, where humans (especially the women) are the hottest thing in the universe.

Darkwing and Megavolt get their first look at Homo sapiens

Darkwing and Megavolt get their first look at Homo sapiens