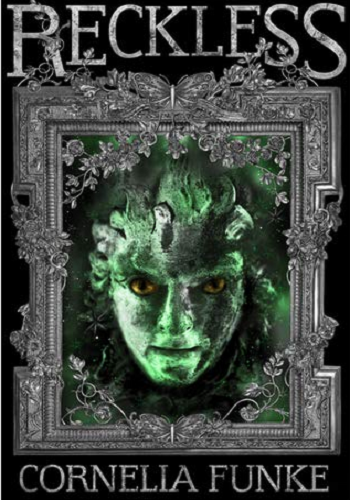 Reckless is essentially about two brothers, a shape-changing fox, and one brother's nurse fiancee. The older brother, Jacob Reckless dropped off the face of the earth after his father died and his mom went...well. Anyway, turns out he's been off in a magical world behind a mirror in his father's old study. His younger brother, Will, winds up following him through, and Will's fiancee, Clara, follows him through. Will gets bitten by a Goyl, a living stone race that have recently begun to spread through bites (thanks to some Dark Magic from their leader's mistress). Now Jacob, Clara, Will, and Jacob's best friend Fox must find a cure before Will becomes a Brainwashed and Crazy statue with Super Strength and a heart of stone( both metaphorical and literal). And then shit happens, like how once Will starts growing Goyl skin, the other Goyl declare him basically their Messiah, and how the humans of the Mirror World have signed a truce with the Goyl, including a wedding between the human princess and the Goyl leader, which his mistress, the Dark Fairy, (who is one scary bitch) isn't very happy with. They also run into Jacob's ex-girlfriend, a fairy with a thing for moths,note  whose name is Miranda the Red Fairy of all things and Evanaugh Valiant, a Jerkass dwarf who knows more about the Mirrorworld than he is entitled to. There is also unlimited Ship Tease, Purple Prose of the best and first order, and enough Darker and Edgier, written Costume Porn, Scenery Porn and Mythology Gags to drown in.

They do find a cure, but Jacob is now cursed himself, and Jacob and Fox must find a cure for him. Within a year.

A sequel, Fearless, was released on September 16, 2012, and Reckless (UK) or Mirrorworld (US) will be a five-part series.