Our Orcs Are Different 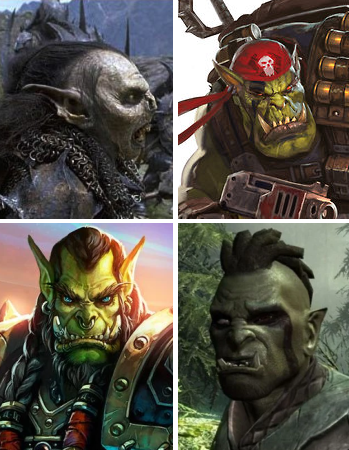 Top row: Tolkienesque
An Orc from The Lord of the Rings and an Ork from Warhammer 40,000.
Bottom row: Revisionist
An orc from Warcraft and an Orsimer from Skyrim.
"Wesnoth Orcs are brown; a portrait showing them as green is inconsistent."
— Artistic Guidelines for Contributing Artists from the open-source game Battle for Wesnoth
Advertisement:

Ever since Tolkien, the worlds of fantasy literature and video games have been overrun with tribes of ugly, bellicose humanoids, whose main purpose for existence is to serve as the Mooks of the Forces of Evil. Trolls, goblins and/or hobgoblins (and such) are usually also closely associated with them, or may just be different names for the same thing.

The word orc comes from Old English and shares linguistic roots with ogre, borrowed from French. Both terms are related to the Latin word Orcus, the name of an Etruscan/Roman god of The Underworld which came to denote the place itself (like Greek Hades). Later, Orcus was glossed as a term for a demon or hell itself. Thus, the Old English word orc, as attested by medieval glossaries — as well as cognates in other languages like French ogre and Italian orco — denoted a kind of demon or monster. However, the only appearance of orc in surviving Old English literature comes from Beowulf in the form orcnéas, "demon-corpses", sometimes translated as "living dead" — ghouls, perhaps? Orcnéas are said to be evil creatures descended from Cain, together with eotenas (giants), ylfe (elves) and gigantas (giants, again, so eotenas is sometimes translated as ogres or trolls). note Confusingly, a homonym of orc also exists in Old English with the meaning of "cup" or some other sort of "vessel", with the plural orcas appearing in Beowulf. This is also derived from Latin, but is completely unrelated to Orcus since it comes from urceus, much later orca — which itself has a homonym meaning "whale", hence killer whales are called orcas.

In modern fiction, Orcs come in two general flavors: the original model developed by J. R. R. Tolkien who borrowed the word from Beowulf and used it for his version of goblins, and a revisionist model best exemplified (but far from invented) by Blizzard Entertainment's Warcraft series.

There are also orcs IN SPACE!!!


Although the two interpretations differ significantly, they broadly share both a monstrous, primitive appearance and conflict with humanity and the other Standard Fantasy Races. The author's choice of which model to emulate usually depends on whose perspective the story is written from, the story's relative position on the Sliding Scale of Idealism Versus Cynicism, and whether or not the author intends to explore ramifications of killing sentient beings. In any case, expect humans to treat revisionist orcs as if they were Tolkienesque orcs, at least initially. Also both types are generally mooted to reach maturity faster and to have a lower life expectancy than even humans, though this isn't universal. Around half human lifespan seems to be common, with half-orcs bridging the difference. You average orc will be an adult at ten, in their prime at twenty, be middle aged at thirty, old at forty and venerable at fifty, in the unlikely event they live that long - orc lives tending to be dangerous, brutish and short.

In modern fiction, "orc" is sometimes spelled as "ork", both to make the orcs that much more different and for Xtreme Kool Letterz appeal. 'Orc' is usually the spelling in medieval fantasy, while 'ork' is the norm in modern or futuristic settings, as popularized by Warhammer 40,000. The form "orke" appeared in early modern English during the Renaissance period, perhaps influenced by the French "ogre". Tolkien considered spelling it "ork" late in his life, but never got around to revising his published stuff for it.

Orcs typically share a close relationship with goblins, and indeed Tolkien originally used the words "orc" and "goblin" more or less interchangeably, though modern fantasy typically separates them into distinct species. Orcs are also frequently associated with other monstrous humanoid races. See: Our Ogres Are Hungrier, All Trolls Are Different and Our Giants Are Bigger, as well as Standard Fantasy Races. The trope often overlaps with Pig Man, though the pun on "pork" is linguistically coincidental. They are often the "adopting" parent when a child is Raised by Orcs. In many cases, Space Orcs will literally be fantasy orcs IN SPACE!, although it's somewhat more common for them to be an original species with a Tolkienian orcish personality added on.

In the 41st millennium, few races are as barbaric and savage as th-*bonk* OI SHUT YO OOMIE MOUTH! DA BOYZ ARE DA BESTEST! TIME FOR A GUD N PROPA WAAAAGH!!!!

In the 41st millennium, few races are as barbaric and savage as th-*bonk* OI SHUT YO OOMIE MOUTH! DA BOYZ ARE DA BESTEST! TIME FOR A GUD N PROPA WAAAAGH!!!!