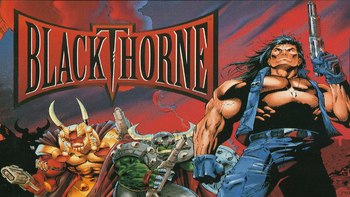 "A too classical game to be extraordinary. Although your character can shoot backwards just by aiming behind him, without even looking. Maximum badassness."
— Comment of JV, French video game magazine, about the game in the Blizzard special issue
Advertisement:

A Cinematic Platform Game from 1994, developed by Blizzard Entertainment and published by Interplay Entertainment, for the SNES and PC (later ported to the 32X, Macintosh, and Game Boy Advance). The gameplay is very similar to Prince of Persia; the main differences are that combat is done with guns and bombs instead of swords, and there is an item inventory system (some levels require the use of these items to make progress).

The game begins with player character Kyle Vlaros (Also known as Blackthorne) being teleported from Earth to the world of Tuul by a magician called Galadril, who tells Blackthorne that he is the heir to the throne of the kingdom of Androth. However, Androth has been conquered by Ka'dra'suul, and it is up to Blackthorne to free the Androthi and defeat Ka'dra'suul.