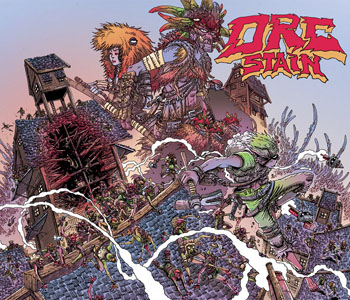 For a million millennia, orcs have been raiding and killing, with thousands of gangs and tribes warring with other races—and each other—the world over. However, one chieftain known as the Orctzar has united dozens of tribes under his banner, creating the largest orc empire anyone has ever seen. He's searching for a "God Organ", which he believes will make him even more powerful; but a seer tells him a certain one-eyed orc is his only hope to unlock its power. The Orctzar's armies begin their search...

Our hero, One-Eye, is tired of brutal orc society, and is busy trying to make a living on his own as a thief (a decidedly non-orcky pursuit), and just wishes the Orctzar's minions would leave him alone. Things, of course, do not go as planned.