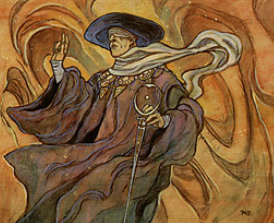 Vision doesn't always rely on sight.
"There are some who believe him to be blind; while others, perhaps with more reason, claim that he has travelled far beyond blindness, that indeed, he can do nothing but see: that he sees the fine traceries the galaxies make as they spiral through the void, that he watches the intricate patterns living things make on their journey through time."
— The Sandman (1989) on Destiny of the Endless
Advertisement:

The Blind Seer is an old archetype. They are blind, and yet they can see more than we can. This seems to be a recurring theme in mythology; Justice is blind, Odin plucked out an eye to gain knowledge, and the Graeae had had only one eye among three of them. Time and time again, the sacrifice of sight is shown to result in greater cosmic knowledge.

This trope is the reason that being born with a caul (common with the Magical Seventh Son) is taken as a sign that a child will have seer-like powers.

A special case of Disability Superpower, often demonstrated with Prophet Eyes. Blindfolds are another favorite.