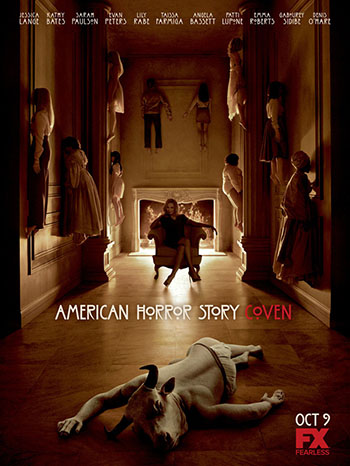 American Horror Story: Coven is the third season of Ryan Murphy's acclaimed anthology series. It follows a group of girls who are witches, and, as such, have unique supernatural powers. They attend a small school for girls like them in New Orleans, and must deal with the trappings of what inevitably happens when unstable teenagers are given immense destructive power. Things only become more complicated when the Supreme, an incredibly powerful witch with all of their powers and much disdain for the human race, decides to move in and teach them how to defend themselves in the wake of a modern-day witch burning.

The story proper begins in the 1830s, with New Orleans socialite Delphine LaLaurie, who is working to marry her daughters off to wealthy men. She tries to make herself younger using blood, and puts her slaves through horrific torture, sewing their mouths shut and using them in Satanic rituals. One of the slaves she tortures is the lover of New Orleans voodoo queen Marie LaVeau, who enacts brutal revenge on LaLaurie. We then fast-forward to the modern day and a teenage girl named Zoe Benson whose boyfriend dies during sex. The authorities chalk it up as a brain aneurysm, but her family explains that she was actually the one who killed him, albeit unintentionally. They are actually from a line of witches. Sometimes the powers skip a generation, but Zoe was not so fortunate, and now must travel to the above-mentioned school in order to learn how to control her abilities.