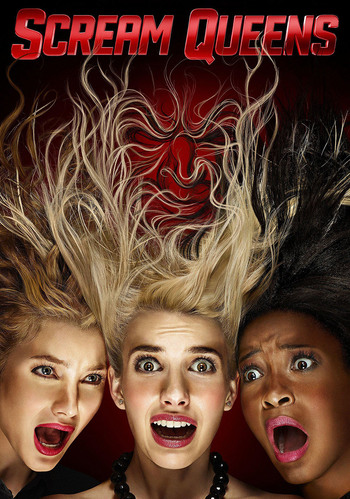 Couldn't you just die?
"It’ll be fun, like a 'Friends' episode... but someone’s trying to murder all the Friends."
— Gigi Caldwell
Advertisement:

Season one revolves around the Kappa Kappa Tau sorority house, which becomes the target of a mysterious serial killer known as the Red Devil. With tensions running high on campus, it's a race to discover the killer's identity before he (or she) kills them — or they kill each other. What's more, the mystery of the Red Devil may tie into another mystery involving the death of a sorority sister twenty years ago.

Season two features a time skip of three years from season one, and moves the focus from Kappa Kappa Tau to a hospital bought out by Dean Munsch, staffed by Chanels One, Three, and Five, and Zayday.

The show is notable for its slick visual style and campy, surreal humor, and many of the characters are broad archetypes with occasional moments of hidden depth — this is a Ryan Murphy show, after all.

The show was canceled after two seasons, although its anthology format left no real lingering story. However, in 2020 Ryan Murphy confirmed that he was working on a third season revival of the show.