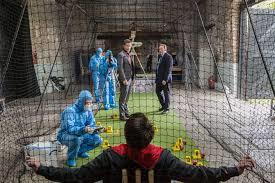 A lot of sports involve striking a ball that is moving at high speed. To allow people to practice, many of these sports have machines designed to launch balls at a player: bowling machines for cricket, pitching machines for baseball and softball, tennis ball servers for tennis, etc.

Given these machines are essentially miniature cannons designed to launch projectiles. It's not surprising that, in fiction at least, these devices can and have been weaponized then used either with lethal intent or at least cause distractions or subdue people. And sometimes depending on the type of machine, their projectiles can be replaced with something else.