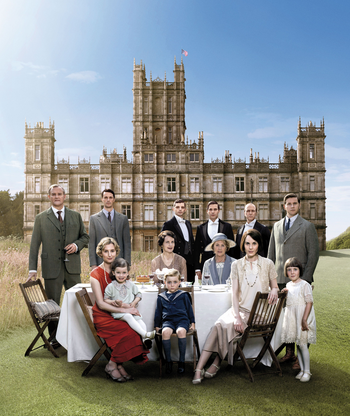 "I made my money the old-fashioned way; I inherited it."
— John Raese
Advertisement:

The thing about wealth is that it tends to have a sort of inertia to it. It is hard to gain, but once you have it, it takes some doing to lose it. Having the resources to make investments means that it is easier to keep what you have and even make more. And what do you do with all that when you are old and gray? Pass it on to your children, of course, and the cycle will continue on from there. "Old money" refers to families that have been wealthy for many generations, and maintain their lifestyle through stewardship of an existing family fortune.

Often goes hand-in-hand with Blue Blood, especially in countries (such as much of Europe) that have a tradition of social stratification, with nobility granted formal titles which elevated them above commoners. Even in places where no such formality exists, Old Money will tend to know "their sort" and keep to the same social circles, to the exclusion of the Nouveau Riche. In the United States, the "oldest" of money will brag about their family arriving on the Mayflower (1620), or their families being on the list of "the 400" that early New York socialite Mrs. Astor

They tend to display their wealth in Simple, yet Opulent ways, in contrast to the Conspicuous Consumption of the Nouveau Riche (such as having unwritten style rules, like which kind of High-Class Gloves to wear to which event). They are often Idle Rich, but sometimes will get a job they do not really need, just in order to avoid Rich Boredom. Of course, sometimes making sure their fortune is not frittered away by incompetent underlings or their own Inadequate Inheritors is a full-time job in and of itself.

Compare Blue Blood, Remittance Man, and Uptown Girl. Contrast Impoverished Patrician, someone who has titles but not money, Nouveau Riche, someone who has money but not titles or social graces, and Self-Made Man, someone who made their money through hard work rather than inheritance.

If you are thinking of the phrase "But what's that in old money?", see Old British Money.