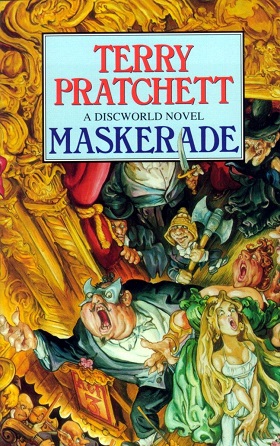 The 18th Discworld novel, and the fourth or fifth in the 'witches' theme. Its purpose within the theme is to bridge Lords and Ladies and Carpe Jugulum, which it does by means of an extended parody of the 1925 silent film version of The Phantom of the Opera.

With the loss of Magrat to her royal calling, Nanny Ogg and Granny Weatherwax find themselves with a coven of two. Their eye falls on the expansive Agnes Nitt, who prefers calling herself Perdita X Dream (or, as the women of Lancre say, "that Agnes girl who calls herself Perditax"). Agnes, though, has no interest in witches, and wants to be an opera singer. Stealing away to Ankh-Morpork, she soon finds herself (and her amazing voice) as a vocal understudy to the skinnier but much dumber and less melodious Christine.

As it turns out, opera is much less about singing and more about superstition, mysterious strangers coming out of mirrors, vicious murders, and catty sniping. Oh, and losing buckets of money, much to the chagrin of the opera's owner. As it just so happens, Nanny and Granny have their own business in Ankh-Morpork, and are not above giving young Agnes a hand, regardless of whether she wants it or not.