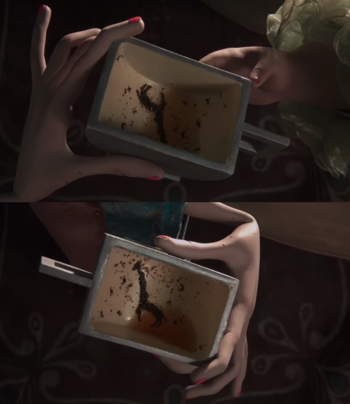 "Impending doom" or "a cute boy". Is there a difference?
Ronald Weasley: Right. What can you see in mine?
Harry Potter: A load of soggy brown stuff.
— Harry Potter and the Prisoner of Azkaban

Tasseomancy (alternatively known as tasseography or tassology) is a form of divination that interprets patterns in tea leaves, coffee grounds, or wine sediments.

The method involves the quarant (the person getting their fortune told) being provided with a cup of a particular drink (Tea, Coffee and Wine being the most common forms). They are asked to drink from a specific cup, leaving a small amount for the leaves and/or pulp to gather. The leaves/pulp then form a variety of shapes, from animals to inanimate objects, even mythical creatures and specific people. These shapes hold symbolic significance, their presence spelling things ranging from good fortune to omens of doom.

Related to other methods of fortune-telling like Crystal Ball reading and Tarot Cards.