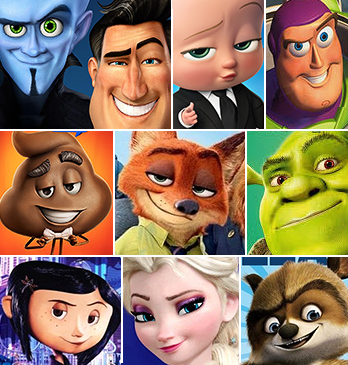 You know that face. The clever, asymmetrical smirk. The similarly crooked eyebrows. The half-closed eyes. The intense stare-down that comes at you from the promo posters. It's the expression that tells you the hero is going to be up to no good, and is much cooler than any of those classic, mainstream, conformist wimps those other studios produce... except the character him- or -herself never, or rarely, makes that face to begin with in the show! It's usually a way to get audiences to see a particular film over another, and promises a very different tone from what we are used to. It's the facial expression form of hip, sassy and snarky dialogue.

This trope pertains to faces seen outside of the body of the film or TV show and only in marketing material... in posters, billboards, ads, etc. Otherwise, it would be a No Fourth Wall or an Aside Glance.

Films produce advertising and posters as various stages of production and all of these are meant to be teasers. The stuff that comes first is normally dominated by faces staring at you because that's the only thing finalized at that point. So the DreamWorks Face is one of numerous stock attractive faces. For instance, you may have also seen the "everyone is smiling, bright eyes and maybe waving at you".

See also Mascot with Attitude, American Kirby Is Hardcore, Sean Connery Is About to Shoot You.