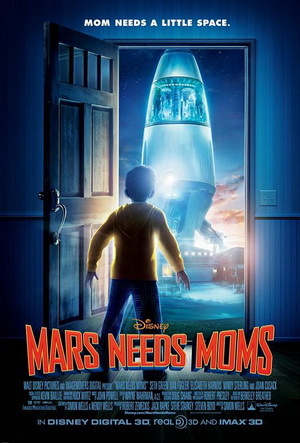 Mars Needs Moms is a 2011 Image Movers film distributed by Disney based on the storybook by Bloom County creator Berkeley Breathed and produced by Robert Zemeckis. It focuses on young suburban kid Milo, who late one night discovers his mother has been abducted by Martians in an attempt to use her skills in parenting to raise their own young. After accidentally hitching a ride on their craft, he lands on the red planet and meets up with another human, an 80's era Manchild who has gone a bit crazy after being brought to Mars in the same way as Milo. Together with a rebellious young Martian girl they attempt to save Milo's mother from her captors.