Spoilers for this movie will be marked as usual. However, due to its nature as the prequel to Monsters, Inc., that film's spoilers are unmarked here. You Have Been Warned! 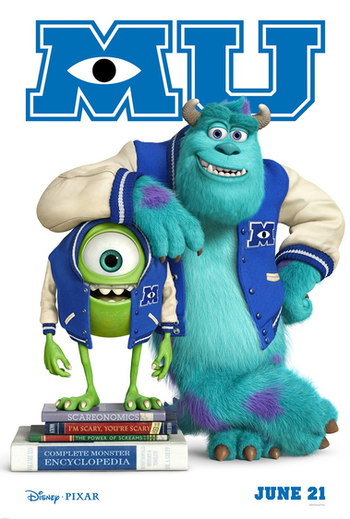 Before they were incorporated, they had to be educated.
"Scariness is the true measure of a monster. If you are not scary, what kind of a monster are you? It's my job to make great students greater, not make mediocre students less mediocre."
— Dean Abigail Hardscrabble
Advertisement:

Michael "Mike" Wazowski (Billy Crystal) has built his entire life around being a scarer. Ever since he visited Monsters, Inc. as a child, he has dedicated his life to learn the ins and outs of the craft. When he is accepted to and attends his dream school, Monsters University, he meets fellow freshman James P. "Sulley" Sullivan (John Goodman).

While he is also a scaring major, they could not be from more different backgrounds. Mike has been a diligent studier who has worked against all odds to get to his position, while Sulley is a notorious slacker, coasting off his family name of prestigious scarers, which has gotten him far until now. Naturally, they immediately butt heads, and an intense rivalry ensues. The chaos escalates the entire semester until an embarrassing incident during their final exam where they upset Dean Hardscrabble (Helen Mirren) causes them to get kicked out of the scaring program.

To get back in the program, Mike wagers a deal with Hardscrabble if that they win the university's Greek competition, the Scare Games, both Mike and Sulley can be let back in the program. With no other options, they join the fraternity O.K. (Oozma Kappa), made of other scaring rejects who would love a chance to prove themselves as well. Now with this ragtag team assembled, they have one shot at redemption and to potentially win this daunting competition, with Mike and Sulley becoming the best of friends along the way.

A followup short, Party Central, where Mike and Sulley use door stations to bring a rival fraternity's party to an O.K. one, would accompany the theatrical release of Muppets Most Wanted.