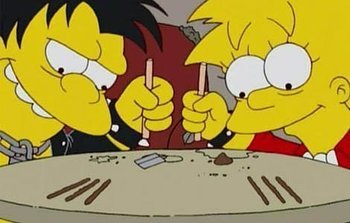 We heard chocolate is addictive but this is ridiculous.
Blair: You sure Layla's asleep?
Nina: Don't worry. I [used] warm milk with extra honey. She'll be out for hours!
— Eerie Cuties
Advertisement:

When writers want to do a Very Special Episode but don't invent a one-shot abuser friend, they generally feel skittish about having their character suddenly use so-called 'hard' drugs. Coupled with this is the infamous rigidity of broadcast standards and practices, who sometimes frown on the depiction of drugs even if it is completely negative.

Thus, any drugs commonly portrayed are just unnamed drugs in a ominous-looking context, such as red-and-white caplets or vaguely white powder. Occasionally over-the-counter but still-unnamed drugs are used, which carries a bit more realism. The writers might also just invent a fictional drug.

A riskier prospect is to depict a named drug, but with ridiculously overblown effects considering the known real-world impact of the drug and the shortness of the storyline. This was commonly done with marijuana despite the public perception of its effects as "bland," and thus a major reason such depictions are avoided in case they are not taken seriously. In any case, the strength of any drug never seems to result in symptoms of withdrawal in further episodes.

Alcohol can usually fit the bill, since it's commonly viewed as merely "adult" or even inoffensive and culturally mainstream, rather than sinful or dangerous.

In comedies, a complete non-drug may be treated as if it were, like sugar addicts or milk-alcoholics: that's I Can't Believe It's Not Heroin! In Speculative Fiction, the drug may be entirely fictional, making it a Fantastic Drug (which, if it gives superpowers, would be Psycho Serum).

Despite the name of the trope, this can show up in works with adult ratings, not just G-rated/family-friendly works, usually for the following reasons: