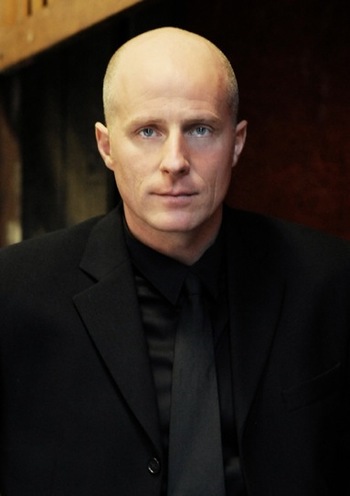 Michael Daingerfield Hall (born October 29, 1970 in Toronto, Ontario) is an actor and voice actor who works in Vancouver, British Columbia, Canada. He originally started out in the 90s in Toronto, voicing Ace Ventura. He moved to Vancouver in early 2000s and voiced several characters on the Transformers Unicron Trilogy. Some of his notable roles in animation are Braeburn in My Little Pony: Friendship Is Magic, Han Solo in LEGO Star Wars: The Yoda Chronicles and LEGO Star Wars: The Freemaker Adventures, Unicorn/Milos Masaryk in Iron Man: Armored Adventures, and his notable anime roles include Johann Trinity in Mobile Suit Gundam 00 and Sesshomaru in Inuyasha: The Final Act. He voiced Superman in the first episode of Krypto the Superdog. He also had a recurring live-action role as Gordon Godfrey on Season 10 of Smallville, as well as appearing as guest characters in several other shows filmed in Vancouver. Recently, he has been voicing Gintoki Sakata in the English dub of Gintama for Crunchyroll. He also teaches voiceover

, and is a fan and a player of tennis.