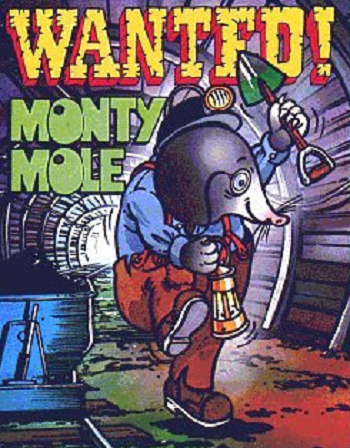 Monty Mole (no relation to the Super Mario World enemy) is the hero of a series of Platform Games from British developer Gremlin Graphics. The series began on the ZX Spectrum, with the more popular games ported to the Commodore 64 and Amstrad CPC.
Advertisement:

The moley adventures start with Wanted: Monty Mole (1984), where Monty decides to raid his local coal pit to help himself through the long winter. By the end of the game, he has acquired a bucketful of coal and a five-year prison sentence.

The story continues in Monty Is Innocent (1985), a short Action-Adventure game in which Sam Stoat helps break Monty out of Scudmore Prison.

In Monty on the Run (1985), Monty flees to a safe house, and, using his five-item freedom kit, navigates escape tunnels and heads for the English Channel, where a boat is waiting to take him out of the country.

Auf Wiedersehen Monty (1987) has Monty, starting in Gibraltar, traveling through the countries of Europe and collecting enough money to buy the Greek island of Montos, where he retires.

Attached to the January 1988 issue of Your Sinclair was a game titled Moley Christmas, where Monty shepherds the production of a Monty Mole game and distributes it to faithful readers.

One more game was produced, Impossamole (1990), developed by Core Design for various computers and the TurboGrafx-16. Here Monty Mole is transformed by aliens into a caped superhero.