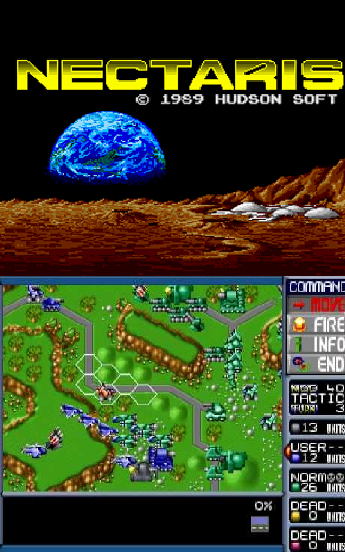 The original cover, and graphics.
Nectaris is a Turn-Based Strategy game by Hudson Soft.
Advertisement:

The game takes place in the year 2089, when the Guicy Empire has launched a surprise attack on the Moon and occupied Base Nectaris. The few surviving units of the Union forces strike back to liberate the Moon and save the Earth from the imperial menace.

The principal mechanics of the game can be described briefly:

The game was originally developed for the TurboGrafx-16 and released in 1989 in Japan and under the title Military Madness in the U.S. A Japan-exclusive sequel, Neo Nectaris, was released in 1994, taking full advantage of the PC Engine's Super CD-ROM² add-on. Ports of Nectaris for the PC-98 and Sharp X68000 were released in 1992 by Japan's prolific strategy game publisher SystemSoft, and a IBM Personal Computer version of Nectaris, with features not found in any other version, was published in Germany in 1995. Another Japan-exclusive release, Nectaris GB, was issued for the monochrome Game Boy in 1998; it was one of the few games to support Hudson's GB KISS LINK infrared modem. Nectaris was remade for the PlayStation in 1998 (this version was released by Jaleco USA under the title Nectaris: Military Madness), and remade again for the PlayStation 3, Xbox 360 and Wii in 2009 and 2010. 2010 also saw the iOS release of Military Madness: Neo Nectaris.

There is also a spinoff series titled Earth Light which uses the same strategy formula but offers a completely different experience with a new story, setting, and unit roster.