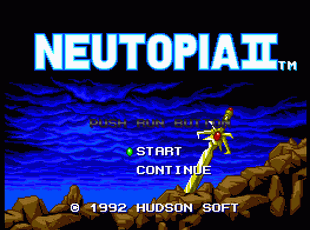 Yeah, this doesn't look familiar at all.
A forever-incomplete trilogy of highly original and innovative adventure games developed by Hudson Soft for the TurboGrafx-16.
Advertisement:

The first game, released in '89, centers around a sword-and-shield-wielding protagonist named Jazeta (not Link), who must scour the land of Neutopia (not Hyrule) to find the eight medallions (not triforce pieces) in order to save the princess Aurora (not Zelda) who has been kidnapped by the dark sorcerer Dirth (not Ganon) in his Climactic Castle (not Death Mountain). Along the way, he uses innovative inventory items such as bombs to blow up dungeon walls and reveal hidden passageways, a fire rod to burn down trees and find even more hidden passageways, a jar (not candle) of Moonbeam Moss to light the dark dungeon rooms, an enchanted bell (not flute) that can open passageways when played, a jar of life-healing potion that can hold two doses at once, a rainbow drop (not ladder) that can bridge small bodies of water, and a magical compass that always points toward his next destination.

In other words, The Legend of Zelda for the TG16, but with enough changes to classify as "original content" and avoid copyright disputes.

Despite this, it is considered one of the best games for the system, and is an enjoyable play-through for any fan of the original NES Zelda.

The second game of the series, Neutopia II, released in '91, did a good job expanding upon the first game's derivative formula. The game follows the adventure of Jazeta's son, who wakes with a start one morning after his sister (mother?) receives a vision that his father was defeated by a dungeon boss and that Dirth is trying to come back from the dead and reinstate his reign of terror. Unlike his father, he can walk diagonally and swing his sword while walking. He also wields new, never-before-seen items such as boomerangs, three wands (not medallions) which cast elemental spells, a flail (not hookshot) that can grab faraway items and damage enemies from a distance, and an Aqua Lung (not pair of flippers) that lets him swim.

In other words, The Legend of Zelda: A Link to the Past for the TG16.

In 2007, Nintendo finally got their due licensing fees as both games were released on the Wii's Virtual Console.