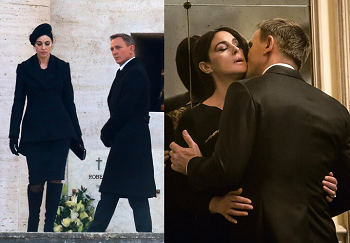 She's at the funeral, all weepy. Charlie, Bob's close friend, goes over to console her. They have a little discussion. They "comfort" each other.

Naturally, doing this with a woman whose husband isn't even cold in his grave yet is considered rather disrespectful and improper, to say the least. It suggests that:

Occasionally it's given (or attempted to be given) a less negative spin: Overcome with mutual grief, they turn to each other and because of their loneliness and emotional vulnerability it leads to other things. But they'll still feel incredibly guilty about it, and other mourners who find out are going to be pretty disgusted. Another somewhat better way to give it a less negative spin concerning Charlie at least is by having him not even being a friend of Bob at all and not even pretending that he mourned him at all, or even going as far as having him be Bob's enemy.

As bad as this is, there are several sub-variants that make it even worse:

The first is a classic murder motive. The second is a way of punishing Charlie for betraying his friend (often he's the next target for the Black Widow). The third is a lesson to wives about the danger of a non-husband male friend offering comfort. While the last situation is the most common for the 3rd scenario listed above — expect a lot of angst and grief about having committed adultery without realizing it. Quite a few examples on this page are about characters merely attempting it rather than actually managing to go all the way with it.

Contrast Romancing the Widow, which is when an appropriate time of grieving has passed, and the widow is encouraged to move on with a new romance. See also Sex for Solace or On the Rebound.

See also Death of the Hypotenuse, where Charlie had feelings for Alice before Bob died.