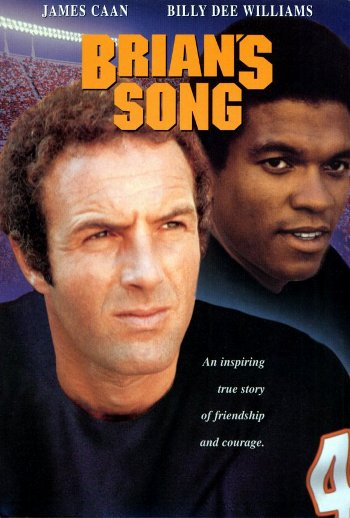 "This is Beaches for men."
— Fafa the Groundhog
Advertisement:

Caan and Williams respectively play Brian Piccolo and Gale Sayers, two star running backs in college (Piccolo led the nation in rushing and scoring during his senior year) who are both rookies for the Bears and thus competing for the same position. Piccolo is a loud, goofy extrovert and Sayers very softspoken and reserved, but after getting on each other's nerves with a couple of pranks early in their career, they are asked to room together (since the team is going to room by position), and become the first white and black players in team history to share a room.

They end up becoming great friends even though Sayers is the star and Piccolo rarely plays. Then Sayers badly injures his leg and Piccolo becomes the starter and puts up great numbers, while constantly visting his injured friend to push Sayers through rehab — Piccolo knowing he himself will become a better player if he has to compete with a healthy, fully-recovered Sayers. With a dilemma over whom to play, coach George Halas decides to switch Piccolo to fullback, even though he's undersized for the position, and keep the speedier Sayers at halfback, so they can both start.

The new arrangement works well for a season, but then Piccolo's weight starts dropping and his 40-yard dash time slows down. The coach sticks with him as the starter for a little while longer, but then his performance starts to suffer on the field, he wheezes on the sidelines complaining of allergies, and he is benched. Halas wonders whether Piccolo has an injury he isn't revealing or if family troubles are affecting his mentality and emotions. Then it turns out that he actually has a tumor in his right lung, has to have surgery, and will probably never play football again. The two friends' prior roles are reversed as Sayers sticks with his friend through the rehab, but then it is discovered that the tumors are spreading and a second operation will be required....

A 2001 remake, starring Mekhi Phifer and Sean Maher, was shown on television under the The Wonderful World of Disney anthology.