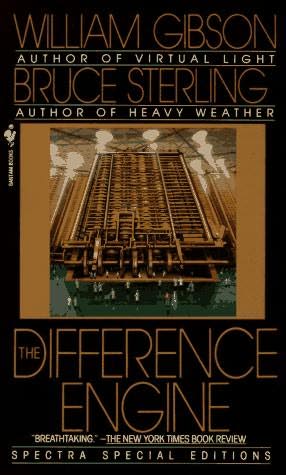 The Difference Engine is a 1990 alternate history novel written collaboratively by William Gibson and Bruce Sterling. It is a prime example of the steampunk sub-genre, often considered the Genre Popularizer.

It posits a Victorian Britain ca. 1855 in which a great wave of technological and social change has occurred after entrepreneurial inventor Charles Babbage succeeded in his ambition to build a mechanical computer (actually his Analytical Engine rather than the titular Difference Engine). Among the many various changes that arise as a result of this innovation are an even more powerful British Empire, a Divided States of America, an early Communist Revolution in Manhattan led by Karl Marx himself, steam-powered gurneys (this timeline's equivalent of cars), and the premature invention of "camphorated cellulose" (aka celluloid - the first thermoplastic).

The story follows Sybil Gerard, a political courtesan and daughter of an executed Luddite leader (she is borrowed from Benjamin Disraeli's novel Sybil); Edward "Leviathan" Mallory, a paleontologist and explorer who comes into a lot of money thanks to a good bet on an advanced steam gurney model; and Laurence Oliphant, a historical figure with a real career, as portrayed in the book, as a travel writer whose work was a cover for espionage activities "undertaken in the service of Her Majesty".

Linking all their stories is the trail of a mysterious set of reportedly very powerful camphorated cellulose computer punch cards and the individuals fighting to obtain them; as is the case with special objects in several novels by Gibson, the punch cards are to some extent a MacGuffin.