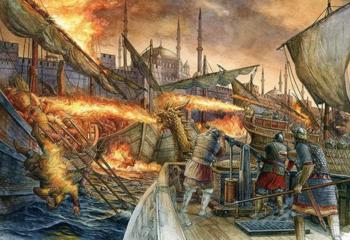 Before ironclads came on the scene, ships were extremely flammable. However, since they also had ready access to water, exploiting this required something special. Enter the Byzantine Empire, who developed the Trope Namer, a type of fire that was impossible to extinguish with water. Ever since, many works involving pre-gunpowder navies involve some form of it.

Numerous naval incendiaries exist, but to properly qualify as Greek Fire they must possess certain characteristics.

Greek Fire is usually also universally feared for obvious reasons, as an ancestor of sorts to napalm and modern flamethrowers. The exact recipe was a state secret known only to two families: the Kallinikos family, who were descended from its original inventor, and the Imperial family. As a result it's been lost to history. However, some putative components include some kind of naphtha (light petroleum) as the key ingredient, quicklime (calcium oxide reacts explosively with water), resin for the viscosity, sulphur, potassium nitrate, and, according to some scholars, gunpowder. Preparing Greek Fire was an extremely dangerous process given its volatility, also requiring complex technology for the period for petroleum distillation. That's why the secret was bestowed to only a few.

Note that it is not exclusively used at sea, but a combination of the relative ease of employment due to era boarding tactics and the ability to destroy ships entirely through secondary wood fires, leaving nowhere to escape, make it far more effective and terrifying at sea.