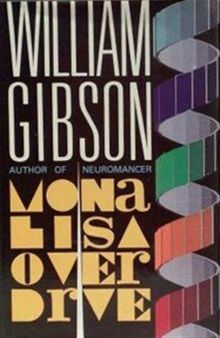 Mona Lisa Overdrive by William Gibson is the third novel in the Sprawl Trilogy. Published in 1988, the book switches off between the interwoven stories of four different protagonists, who are each involved in a plot to kidnap famous sim-star Angie Mitchell: Mona, an innocent young prostitute; Kumiko, the daughter of a Yakuza businessman, Slick Henry, an ex-convict turned junk artist; and Angie herself, who has the unique power to enter the Matrix without a computer. Characters who return from the first two books include Angie and Bobby Newmark (from Count Zero), Molly from Neuromancer (now called Sally Shears), and the Finn, from both (well, sort of).