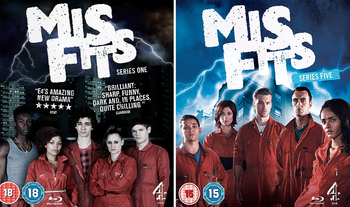 Being a superhero delinquent is not steady work.
A show which suffers an excessive regular turnover in the main cast. Regulars might last for a season or two at the most and even the (seemingly) most vital characters have a very high chance of being dropped at the end of the year. This is not merely a large cast- the core cast at any one time might be pretty small, just prone to being replaced.
Advertisement:

Generally, this happens most organically where a series is mostly concerned with a place of work such as a hospital or police station at which some turnover might be expected, but it is not limited to such. For obvious reasons this is much more likely to happen in a Long Runner; Long-running shows without turnover frequent enough to qualify for this designation might still qualify for Long-Runner Cast Turnover.

The actual way the old characters are written out can range from merely Put on a Bus to Chuck Cunningham Syndrome. Expect a lot of Suspiciously Similar Substitute style replacements. When a new regular conveniently shows up just as another is shown the door, that's a Convenient Replacement Character.

In music, this is Revolving Door Band.