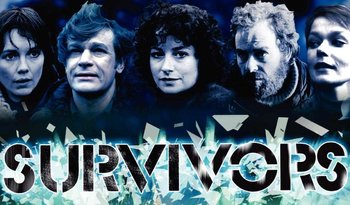 Survivors was a post-apocalyptic drama created by Terry Nation for The BBC. It ran for three seasons (the second and third without Nation's involvement) from 1975 to 1977. In 2008, it was "re-imagined" and re-launched, this time lasting two seasons before being canceled in 2010. Officially, the new series was based on an original series novelization which Nation wrote. In 2014, Big Finish Productions started producing an audio drama series based on and taking place alongside the 1975 series, including crossovers with the original cast.

Both versions are set in the then-present day and depict the aftermath of a virulent disease that wiped out 99% of the human race. It was generally just called 'The Death' in the original but was identified in the remake as 'European Flu'-being released from a laboratory. A disparate band of survivors is thrown together and must now face the struggle of a dangerous life with no society, police or government. However, in both versions, there eventually appear people who have ideas about re-establishing a form of government.

Well, look on the bright side. Global warming's not going to be a problem any more...

There is a character sheet for the remake, though it may contain spoilers.

Not to be mistaken for Survivor.

Both series provides examples of:

The 1975 series provides examples of:

The 2008 series provides examples of: