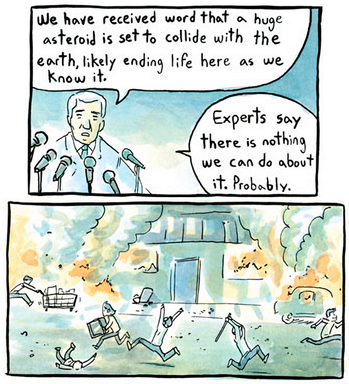 "The city was on fire for weeks... maybe months, I don't know. I hid down here in the museum... it was the closest building to the shelter I was in. But I could hear what was happening above. People howling like animals. Chaos. Looting, killing, it's like every foul thing inside of them came out."
— Carol, Fallout 3
Advertisement:

An asteroid is falling to Earth. A tentacular monstrosity has risen from the depths and is unstoppably destroying everything and spawning horrors. Satan has successfully copulated and his spawn will doom us all.

Regardless, it's The End of the World as We Know It, which means it's time to party. Or Freak Out. Or run. Whatever. There's no tomorrow, which means all bets are off. This usually crops up in Just Before the End settings. Either the hero takes part in the orgiastic excesses before the start of The Hero's Journey or he holds himself above it all to show nobility, or maybe he has no clue what's going on and just gets caught up in the action.

This comes in two forms:

What it boils down to is the author's optimism or pessimism. It's an extended exploration of Hobbes Was Right (with a small chance of Rousseau Was Right).

For when the heroes are breaking the rules because they need to avert the apocalypse, that's Screw the Rules, It's the Apocalypse!. Occurs Just Before the End and often segues into After the End. Contrast The Apocalypse Brings Out the Best in People.