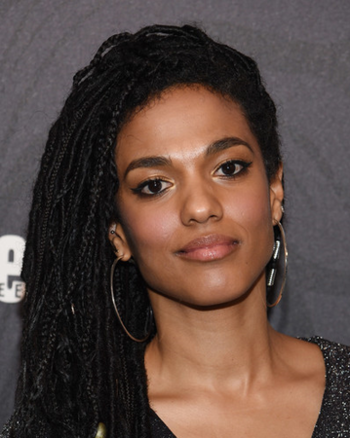 "I'm fully aware that Doctor Who will always, always be part of my life, and that's not something I would run away from in the slightest. I wear it with pride, definitely."
Advertisement:

Freema Agyeman (born Frema Agyeman, 20 March 1979) is an English actress, born in London to a Ghanaian father and Iranian mother. When she was young, she was a Star Trek nerd, thus making her One of Us.

When starting her acting career, she made an appearance in the Crossroads Revival in 2003 (as one of the hotel staff) and like many a British actor, has been in The Bill (in her case, three times as two different characters).

One of the high points of any British actor's career, of course, is landing a role on Doctor Who. Freema originally played the Cyber-controlled Adeola Odoshi in "Army of Ghosts", where she ended up put out of her misery by the Doctor. The next season, however, in "Smith and Jones", she made her first appearance as Martha Jones, the Doctor's companion.note Martha was described inaccurately as "the first black companion", a title that actually goes to Rose Tyler's boyfriend Mickey Smith. Martha is the first to get billing in the opening credits as a first to be a regular companion, because Mickey only joined as a companion in a few). The two characters being played by the same actress was explained away by establishing that Adeola was Martha's cousin. She has reprised the role of Martha Jones several times in the franchise, such as on the spin-off show Torchwood.

Freema also starred on Law & Order: UK, alongside co-Sci-Fi actors Jamie Bamber and Peter Davison. She played Larissa, mentor to the young Carrie Bradshaw (AnnaSophia Robb), in the Sex and the City prequel The Carrie Diaries. She went on to appear in the role of Amanita with the online series Sense8. After its finale, she took the role of Dr. Helen Sharpe on the American medical drama New Amsterdam (2018).