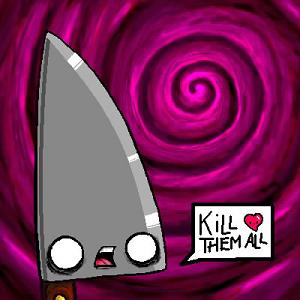 "Kill Them All" by FrealaF

on DeviantArt
"I hear voices in my head
They counsel me, they understand
They talk to me
They tell me things that I can do
They show me what I'll do to you
They talk to me!"
— Randy Orton's theme song "Voices"
Advertisement:

Whenever characters start hearing the Voice of the Legion whisper in their ear, or the Black Speech dancing on the wind, there's something bad in store for them... and it comes in four flavors! — Insanity Berry, Evil Sauce, Good Mint, and Chaotic Neutral Licorice.

Insane — Bob's completely lost his mind, but how can we make that plain to the audience? Simple — Have him mention hearing voices in his head, or depict him conversing with them. Closely related to Split Personality. If Bob is a telepath suffering from Power Incontinence, the voices may actually be the cause of his madness, rather than a symptom.

Evil — The evil version can come from a lot of sources. Demonic Possession, nearby ghosts, Artifacts of Doom and Tomes of Eldritch Lore. The Demon/Spirit/Artifact(s) possessing Bob may serve as the "evil" shoulder angel, and rather than (or in addition to) forcing him to do evil, tells him to. As Bob realizes Evil Feels Good, the demon can then claim that it didn't make Bob do anything he didn't want to.

Thanks to a deal with Trope Co., for an unlimited time, we've got two new flavors, Sour Good and Mystery flavor. Except in Nebraska, something about Trope Co. and several hundred liters of Psycho Serum.

Good — The voices come from a higher power, often God or angels. Rather than compel Bob to go on a killing spree, they'll offer him guidance, and likely encourage pacifism. Or cause him to become a Knight Templar...

Chaotic Neutral — It's often unknown where the voices are coming from, whether the source is holy, unholy, or neutral is never delved into. Or even Maybe Magic, Maybe Mundane. Alternatively, the voices come from a multitude of sources, some good, some evil.

Interestingly, Bob may not actually be hearing voices — a common variation is for Alice to make him think he is, using a hidden radio transmitter or the like. If that's the case, see Gaslighting. Subtrope of Terrible Ticking, though they're usually implemented differently.

Steven wakes up somewhere in the Alps. And he hears someone talking to him. Steven can't see him, but the voice is clearly angry at him.

Steven wakes up somewhere in the Alps. And he hears someone talking to him. Steven can't see him, but the voice is clearly angry at him.