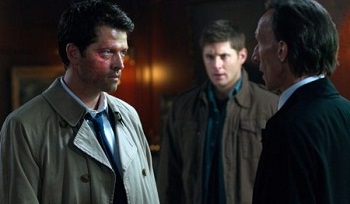 A God-Angel versus The Grim Reaper. Place your bets.
Castiel: What a brave little ant you are. You know you're powerless, you wouldn't dare move against me again. That would be pointless. So I have no need to kill you. Not now. Besides...once you were my favorite pets before you turned and bit me.
Dean: Who are you?
Castiel: I'm God. And if you stay in your place, you may live in my kingdom. If you rise up, I will strike you down. Not doing so well, are you Sam?
Advertisement:

Castiel does not kill Sam, Dean and Bobby, but warns them not to interfere in his business. Assuming his new role as God, Castiel sets out to right some of the wrongs in the world. Dean decides they should find Death and order him to stop Castiel, but the former angel is one step ahead of them, leaving Dean to face an angry Death, while Sam struggles to deal with the broken wall in his mind.