Literature / Invasion of the Body Squeezers 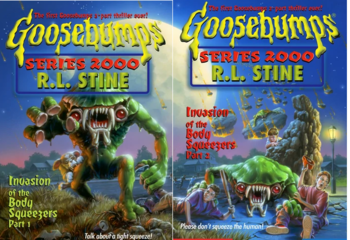 Plenty of Goosebumps books have sequels. Invasion of the Body Squeezers: Parts One and Two are unique in constituting a single story that takes up two books.

Aliens are invading Earth, starting with Los Angeles. By default, they are the giant green monsters seen on the cover; however, they can possess humans by hugging them tightly until they take over their bodies. Once they do this, they can reproduce by spreading to other hosts, all by hugging.

The only person aware of what's happening is 12-year-old Jack Archer. Unfortunately he's a bit too fond of trying to trick people into thinking he's seen aliens when he hasn't, and so nobody is going to believe him.