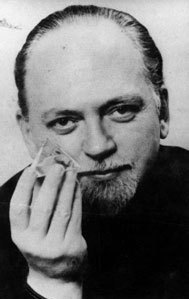 Robert Anton Wilson (1932-2007) was an author of 58 mindbending books, including The Illuminatus! Trilogy (with Robert Shea), The Schrödinger's Cat Trilogy, Cosmic Trigger, the stage play Wilhelm Reich in Hell

, and many more. He also wrote for a bewilderingly wide range of magazines, from Playboy to Fortean Times.

His books contain examples of: