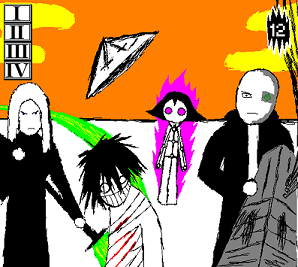 The initial four Gifted, from left to right: Teiuc(II), Osiris(I), Violet(IV) and Peregrine(III).
"I am alone, yes. Never lonely. Not since she left. Always a conversation to be had. Rarely the kindest or most well mannered, admittedly; my friends are sometimes very confusing and may become cross with each other when their views conflict. I think that is good, though. I see each situation in many different ways, where others only hear their own singular perspective. It is a gift, really.... The gift of VOICES."
— Osiris, Page 1.

is a webcomic defined for the most part by an ongoing dialog between its primary protagonists and the readers. Posts made on the corresponding forum

manifest as voices in the characters' heads, allowing readers to vastly affect the story in real-time.

A man appropriately locked in an insane asylum is the first hero to be introduced. Following that, a rational woman who lives by herself on the edge of a cliff, with a cat, an emotive Space Pirate, and a girl who can't speak but has strange and easily-controllable powers have since joined the group.

These four (with five more hinted at) are called the Gifted, and destined to do something involving the Xern Corporation, which controls every decision of the global government of future Earth, and its Executives. It is proving to be more complicated than that, however.

The comic had its start on the MS Paint Adventures forums, but has since moved to its own site. The characters can be spoken to on the official forum

and the updates can be viewed on the website

Unfortunately, due to pressure from real life that stifled its update rate, it has been discontinued.

This work includes examples of these tropes: